Skip to content
News:
HAPPENING NOW. UniCEN roundtable
The peculiarities of Tajik alphabet and sounds
Collaborative lessons under the UNICAC program
Institute of Economy and Trade of Tajik State University of Commerce in Khujand > Без рубрики > Unprofessional Russian experts do not see the obvious

After the terrorist attack against foreign citizens committed on 29 July 2018 by the members of the terrorist-extremist organization Islamic renaissance party (TEO IRP) in the Danghara district of Tajikistan, the media began to throw articles of engaged Russian analysts, experts and journalists on this tragic occasion. Most authors of provocative articles, making make their PR on information aggression, lies and slander, zealously defend the members of the TEO IRP, accusing the law enforcement agencies, which disclosed this crime as soon as possible, of incompetence.

Meanwhile, facts are a stubborn thing. And they convincingly testify to the contrary. Thus, the leader of the criminal group, the main executor of terrorist act in Danghara district Abdusamadov Husein Abdusamadovich, being in labor migration in Odintsovo of Moscow region of the Russian Federation, was recruited in 2013 by fellow countryman, active member of the TEO IRP Ubaidov Nosirkhuja Ahtamovich nicknamed “Qori Nosir”. Brother of Abdusamadov H. – Bakhtiyor nicknamed “Mullah Umar”, was a member of the International terrorist organization Turkestan Islamic Movement of and was sentenced to 24 years in prison for committing crimes of a terrorist and extremist nature.
During the interrogation, Abdusamadov H. confirmed that for 2014 – 2015 years, he took ideological and military-sabotage training in Kum city and in a training camp of Omul city in the oston of Mazandaran of Iran. After returning, in September 2015, as part of an armed group of the TEO IRP that attempted a coup d’état, he took part in hostilities against government forces (later was amnestied). Intending to avoid criminal liability, on 1 November 2015, he flew to Azerbaijan from Belarus, where he got by roundabout ways. From there, on 9 November of the same year, he flew to Iran, which is confirmed by the registration on the airlines. Printouts of his route can be easily found on the Internet and ask the natural question: why, after a failed coup d’état attempt, in order to hide Abdusamadov H. fled not to Russia, America, Europe, Africa, or, as a member of IS (also known as ISIL, ISIS, Daesh) to Afghanistan, where there are thousands of its fighters, but namely to Iran? If Abdusamadov H. was in IS, why did the vigilant Iranian security services opposing this organization allow him to cross freely and repeatedly the border, to move freely through Iran’s territory without detaining him? Using the common international database on terrorists, the intelligence services of the Islamic Republic of Iran knew that Abdusamadov H. was wanted, but kept silent. They could also be alarmed by the fact of staying of the members of the TEO IRP Abdusamadov H. and Ubaidov N.A. in the Moscow cities of Odintsovo and Podolsk, where the terrorist contingent engaged in recruiting work was concentrated with impunity.
The customer of the brutal crime committed in Danghara was Ubaidov Nosirkhuja Ahtamovich, 1973 birth year, native of Farkhor district, an active member of the TEO IRP since 1992. He is wanted since 2012. In 2015, he was put on the wanted list by the Interpol. The criminal went in the footsteps of his father Ubaidov Saidahtam, 1930 birth year, an active member of the TEO IRP. The latter lived in Frunze village, Karl Marx collective farm, Farkhor district and was in charge of the warehouse. With arms in hand, he fought against the constitutional order, was involved in the murders of civilians and terrorist acts against members of the intelligentsia, as well as was engaged in robbery and marauding. His son, Ubaidov Nosirkhuja studied at the religious school of Hissor district under a member of the TEO IRP Mirzoev M.A. Simultaneously with his father, in the early 90’s, when there was still no question about IS, he joined the ranks of the TEO IRP, and later began to take revenge for his father. Ubaidov N.A. had close ties with the head of the combat wing of the TEO IRP “Jamaat Ansarullah” Tabarov Amriddin. From 2002 to 2006, Ubaidov N.A. lived in Iran, where he studied at religious institutions of Zahedan and Khash cities. He took sabotage training in training camps of Iran. Ubaidov N.A., being in Iran, actively engaged in recruiting youth from among the citizens of the Republic of Tajikistan, and sent them to study at religious institutions of the Islamic Republic of Iran. In 2011-2015 years, he was in suburbs of Moscow region of the Russian Federation (Odintsovo and Podolsk cities), where he continued to recruit labor migrants and students in the ranks of the TEO IRP. A criminal case has been filed in relation of him under the article 187 part 2 (participation in a criminal community). He participated in hostilities in the Middle East against the government forces. He has two wives, one of which, Sharifova M.T., who in 2004 studied at the madrasah “Madinat al-Yawm” in Iran. She is currently under arrest in Iraq. Ubaidov N.A directed the actions of the criminal group of Abdusamadov H., which committed the terrorist act, via “WhatsApp”, living nowhere else, but in the Iranian city of Khash.
Other members of criminal group Majidov A.Y. and Safarov Z.D. from February to July 2018 were in labor migration in Russian city of Novosibirsk. On July 17 and 20 this year, they sent remittances in the amount of 20,000 Russian rubles to the name of a member of the TEO IRP Ghaniev Karomatullo Ismatulloevich, who lives in Norak city and used these funds in preparation for committing a terrorist act against foreign tourists-cyclists. Ghaniev K.I. is currently under investigation.
The facts of transfers are confirmed documentary (the Bank transfer receipt in Russian is given below): 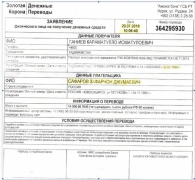 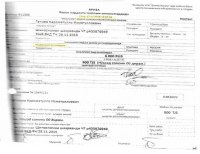 Therefore, the new terrorist act of the TEO IRP in Tajikistan, committed by it on the instruction of the Iranian special services, is a symptom of the fact that they are trying to repeat the bloody history of the 90s. And the society needs to be united, ready to effectively and timely prevent a possible escalation of terrorist aggression.
The above-noted should be information for reflection for Russian experts, and the reason to reconsider their mistaken point of view.

Bakhtiyor RAHIMOV,
Researcher Fellow of Sociology Department of the
Academy of Sciences the Republic of Tajikistan