Skip to content
News:
IGNORE THE PROBLEM DOES NOT MEAN TO SOLVE IT.
ERASMUSDAYS here at IETTSUC!
We continue our mobility under UNICAC project
Institute of Economy and Trade of Tajik State University of Commerce in Khujand > About Us 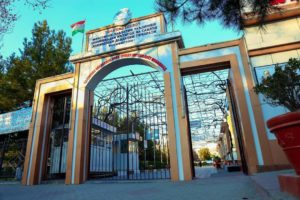 The State Educational Institution of the IET TSUC was established in accordance with the Decree under No. 59 of the Government of the Republic of Tajikistan from February 12, 2010  on the  material, technical, educational, scientific and personnel basis of Single Educational Complex under TSUC.

In 1996 on the basis of the material and technical college of cooperation of Khujand city (Technical College of Cooperation of Tajikistan) the College of Consumer Cooperatives of the Tajik State University of Cooperative Commerce was organized. In the period of Independence of Tajikistan, for the organization and implementation of the policy conducted by the Government of Tajikistan and for implementation directions and instructions of the President of the country on preparing competitive specialists in the world labor market, all the necessary conditions were set up to teach students professional skills, as well as teaching at least two or three foreign languages.

Thanks to the support of country’s leader that during 14 years of independence, in particular from 1996 to 2010, on the basis of the cooperative College, the higher professional educational institution IET TSUC was established.

The main goal of the University is to implement directions and instructions of country’s President, mentioned above. If you pay attention to the history of University from 1996 to 2010, you can observe the following changes:

There are faculties and departments such as: 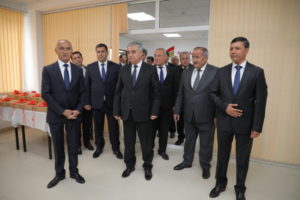 There are more than 210 professors who conduct their professional work at IET TSUC, these are: doctors of science, candidates of science, associate professors, and masters. More than 20 scientists and professors conduct their professional activities in groups with English language of instruction. Also, teachers from other countries such as: USA – Terence Drew, Vanessa Beari, Marcel Minutolo, China – Yang Xiaoyu, teach in these groups. 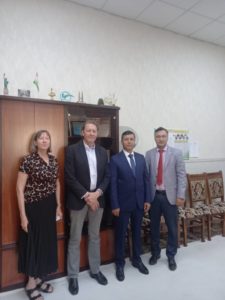 With the aim of implementing directions and instructions of the President of the country – Emomali Rahmon for preparing specialists in the field of international trade, groups with the English language of instruction were created. Until now, two groups with English language of instruction have graduated IET TSUC and, being competitive in the world labor market, successfully landed a job. In these groups all disciplines (economics, law, mathematics, humanities, etc.) are conducted exclusively in English.

IET TSUC in the process of its activities in the field of science and education has been awarded the following distinctions:

In the last three years IET TSUC was winning one of the three leading places between higher educational institutions of the republic at “Student and scientific & technological progress” competition.
In the Olympiad “Cup of Academy of Sciences of the Republic of Tajikistan” in 2014, four of the students took 1st, 2nd and 3rd places. Also, there was organized Olympiad by the Ministry of Education and Science of the Republic of Tajikistan, TSUC’s students received two 1st places, one 2nd place, one 4th place and 1 certificate.

Since 2010 TSUC is a member of the European program ERASMUS MUNDUS. This allows students of second, third and fourth grades to study at the famous universities in Europe; also with the support of International Relations Department of IET TSUC graduates and teachers continue their education in postgraduate and doctoral studies and have internships in the universities of the United States and Asia.
The Enactus team of TSUC won numerous international and national competitions on entrepreneurship, and in 2011 the flag of the Republic of Tajikistan was raised at the international tournament in Malaysia. In 2013, the winner of the Republican tournament won the qualifying round of the World Cup in Mexico City, Mexico, and in the UN in New York, USA. In 2014, he traveled to the People’s Republic of China and achieved success in the international competition.

The material and technical base of the University is at high level.
Currently, IET TSUC has more than 800 modern computers equipped with high-speed Internet. Also, there are 50 modern computers connected to the Internet in computer classes.

In the University’s library there are more than 100 thousand educational books and materials. The electronic library of the IET TSUC is equipped with 50 modern computers, where more than 70,000 books, scientific, educational and methodological materials have been uploaded in electronic form that are available to all students and academicians of the University.
25 classrooms of IET TSUC are equipped with interactive electronic boards, departments – with projectors, laptops, which contribute to the implementation of innovative ideas and tasks.

CCTV cameras are installed in all buildings, faculties, departments and classrooms.
The automated network allows to manage and monitor the process and the quality of education, and also simplifies the work of specialists in the processing and transmission of electronic materials. This network stores information about each student (personal page, the results of admission tests, attendance of classes and current assessments).
Teachers are able to fill in electronic journals and download syllabuses, tests and other training materials to the network, after which students are given the opportunity to get materials directly from there. This network allows each student to receive timely information about the current curriculum.
Also, parents of students have the opportunity to connect to the network via Internet and view their children’s progress, attendance to classes, current grades and the results of all examinations.

At IET TSUC each student has the opportunity to study foreign languages at a high level. The Center for the Study of Foreign Languages has all necessary conditions. It’s equipped with 25 modern computers and electronic board. The Center offers English, Russian, German, and Chinese language courses. Courses on Business plan, 1C accounting, Modern computer technology, Financing, Pricing, are organized in the Business Training Center.

The technological park “Sewing of modern dresses”, where courses of cutting and sewing are taught, was put into operation. In addition, according to customers’ orders, modern clothes and school uniforms are sewed. Also, there functions technological park “Medicinal herbs in Sughd region” and “Finance and business”.

All classrooms and departments of the Institute are equipped with central heating system.

IET TSUC occupies a leading position in the ranking of Higher Educational Institutions of the Republic in terms of quality of education and the level of knowledge of students.

The Institute manages website www.iet.tj and has its newspaper “Economics and commerce”.