Skip to content
News:
HAPPENING NOW. UniCEN roundtable
The peculiarities of Tajik alphabet and sounds
Collaborative lessons under the UNICAC program
Institute of Economy and Trade of Tajik State University of Commerce in Khujand > The Centre of Foreign languages of IET TSUC 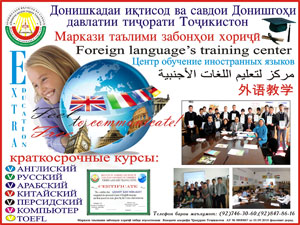 In 2010-2011 academic years in the head office of IET TSUC the Centre of Foreign languages was created. In accordance with the solution of academic Board of IET TSUC, #1 from September, 7th of 2010 the Centre was put into operation and functions to this day. It is equipped with 20 modern computers, laptops, e-board, 3 printing devices and other educational materials, which facilitate the learning process. All the computers are connected to the internet.
Mainusova Zarnigor was born on 8th December, 1989 in Asht village of Sogd region. She works as Manager of the Centre from January, 9 2017.
From September 2010 till today the total amount of people who wish to study foreign languages reached 570. More than 200 foreign books were purchased from different countries, which formed small library. In the process of education teachers may use all necessary materials.
In the Centre meetings and round tables with international professors from USA were organized – Dominic Starker, Cory Wans, young French scientists – Florence, Amrico Vanessa, David, Jones Cook, Jeff Cristiano, Erselia and others. They were impressed by the work of such modern centre and left their comments in the special book of the Centre.
Meetings with representatives of US embassy and Europe are organized to discuss international programs: UGRAD, KTH, KIMEP, ERASMUS MUNDUS, DAAD, RTU and others where all students and professors were able to ask questions and get answers. Several seminars and trainings were conducted by Zaripova M. and Toshmatova D. in the Centre. Workshops and trainings in the institute were conducted online. All students are satisfied by conditions and quality of education, there are no complaints to this day.
Knowledge of foreign language in the modern world for each specialist is mandatory and plays high role in the development and promotion in world society.
The Centre started education of Russian, English, Arabian, Chinese and Tajik Languages.
The Minister of Education of the Republic of Tajikistan – Nuriddin Said, visited Centre and was very impressed by its activity and expressed his satisfaction of education’s process.