Skip to content
News:
HAPPENING NOW. UniCEN roundtable
The peculiarities of Tajik alphabet and sounds
Collaborative lessons under the UNICAC program
Institute of Economy and Trade of Tajik State University of Commerce in Khujand > News > Festival-competition “Andaleb-2016” at the IET TSUC 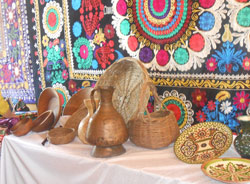 Dedicated to the 25th anniversary of Independence of the Republic of Tajikistan in April 30, 2016 in the Institute of Economy and Trade of Tajik State University of Commerce in Khujand there was held a Republican television competition of folk art “Andaleb-2016.” According to the program of the Festival the team of IET performed on 11 points. Creative group of students of IET managed with the conditions of the competition perfectly: an exhibition of folk art (yurt), demonstration of the ancient men and women clothes of the Tajik people, a comic play, performance of Tajik dances and songs, songs and dances of other nations, Shashmaqom songs, reading of passage from Folk Poets art. 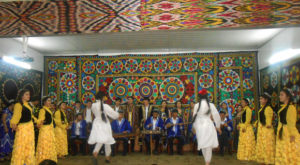 Folk art exhibition, folk culture was presented in the courtyard of the Institute, which had been prepared by students. Various national dishes, handmade crafts, household ancient tools were submitted to the assessment of the jury.  A group of students, consisting of eight people, played national instruments. The other students demonstrated twelve kinds of ancient Tajik clothes of different historical periods. One of the best performances of the competition was the dance under doira who was performed by the 2nd year student Ismoilova Gulru. Ashurov Parviz performed the song, which made the guests happy. 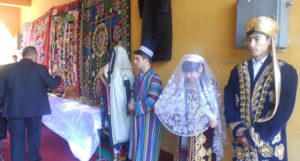