Skip to content
News:
Meeting with the Urgench branch of Tashkent University of Information Technologies named after Muhammad al-Khwarizmi
Completion of the Seminar within the UNICAC Project
Online mobility under WP3.7.2. «Multicultural and multidisciplinary professional»
Institute of Economy and Trade of Tajik State University of Commerce in Khujand > News > Festive meeting at the IET TSUC 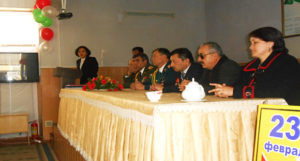 constitutional order, Sadriddin Gazibekov – a participant of the war in Afghanistan, a warrior-internationalist, Muhabbat Urubaeva – the Deputy of the Chairman of the People’s Democratic Party in the Sughd region and they told students to be loyal to the motherland, to protect the material and moral values, to be thankful to policy which is held by the Founder of the peace,  Leader of the nation, our President His Excellency Emomali Rahmon.
The Deputy of the Director of Education at IET TSUC, candidate of philological sciences, docent Ahrorova Gulchehra Usmonovna thanked all the guests for their speech. First-year students have prepared a celebratory performance, in which they welcomed the guests, congratulated them with the holiday by poems and songs, by the demonstration of humoristic scenes; also they prepared a dance performed by the students of the institute. These statements have been prepared by the freshmen of the specialty 960101ta and 960101tb, “Customs” and their curators are teachers Sayfiddinov E. and S. Rakhimov.
Students were presented by the tickets for the National Democratic Party by of the guests of the meeting. The festive meeting dedicated to the 23rd  anniversary of the National Army of the Republic of Tajikistan, held at the Institute, passed at the high level and left a good memory. 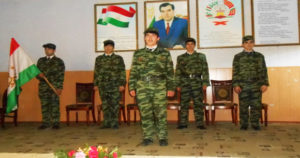