Skip to content
News:
HAPPENING NOW. UniCEN roundtable
The peculiarities of Tajik alphabet and sounds
Collaborative lessons under the UNICAC program
Institute of Economy and Trade of Tajik State University of Commerce in Khujand > News > Consanguineous marriages and their tragic consequences

On the 22st of April at the Institute of Economy and Trade TSUC in Khujand there have been held an event with the participation of 250 students and teachers on “Amendments to the Family Code of the Republic of Tajikistan on compulsory medical examination of young people, the prohibition of consanguineous marriages and their tragic consequences.” 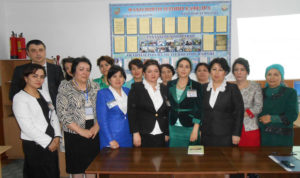 The Deputy of the director on educational work the candidate of philological sciences, docent Ahrorova G.U. introduced the guests:  they were Xojaeva Malika Usmonovna, the head of the house of marriage in Khujand and Saidkhojaeva Madinahon , the Head of the Reproductive Health Centre of Sughd region. In their speeches they told about the danger of consanguineous marriages, birth of traumatized children, unhealthy young mothers, which lead to various women’s diseases. It was noted that unhealthy future generations are the results of consanguineous marriages. All of them are considered to be great risks for the state, society and nation.
The Founder of Peace and National Unity, the Leader of the nation, the President of the Republic of Tajikistan, His Excellency Emomali Rahmon lays emphasis on the development of healthy generation and the prohibition of marriages between close relatives. The Chairman of Sughd region, the respected Abdurahmon Kodiri declared the 2016 year as the year of a healthy lifestyle.
After all speeches, the students and the guests exchanged questions and answers.  The event was held in a free atmosphere of mutual understanding and helped to raise awareness on the impossibility of consanguineous marriages among the young people.