Skip to content
News:
HAPPENING NOW. UniCEN roundtable
The peculiarities of Tajik alphabet and sounds
Collaborative lessons under the UNICAC program
Institute of Economy and Trade of Tajik State University of Commerce in Khujand > News > Socio-economic achievements in the years of Independence in Tajikistan

On April 19, 2016 there was held a meeting of the scientific-research conference of the faculty and students of the Institute of Economy and Trade, Tajik State University of Commerce in the city of Khujand.

At the opening ceremony, the Director of the Institute of Economy and Trade TSUC doctor of economic sciences, professor Aminov I.A. highlighted the importance of this scientific and research conference on “Socio-economic Achievements during the Years of Independence” and the 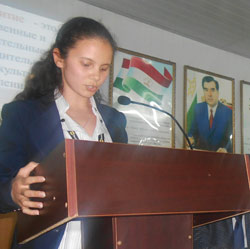 development of science in the Institute. The importance of role of the Department of Science and Innovative Technologies in the IET in organization of conferences, lecturers’ speeches and the articles which affect the main socio-economic issues of the Republic of Tatarstan was noted.
Then, the candidate of economical sciences, docent Alijonov A. in his speech on “Socio-economic achievements of the Republic of Tajikistan within 25 years: problems, solutions and prospects” brought significant facts about the socio-economic achievements of the country over the years of independence.
The candidate of biological sciences, docent Daniyarova M.M. gave a presentation on the theme “Healthy people are the foundation of a healthy society.” In his speech she addressed health issues  and noted that the year of 2016 was declared as the Health year in the Sughd region.
Under the guidance of the assistant Avazmatova G.N. the student of the 3rd course of the specialty 260202ru Panfilova Maria spoke on the topic “Main Economic Achievements in the Years of Independence and Participation of Young People in their Strengthening” and highlighted the role of young people in sustainable development of the national economy.
Thus, the scientific and research conference at IET TSUC was continuing its work until April 26th and lecturers listened to scientific reports of other lecturers and students and discussed them at the sections and departments. 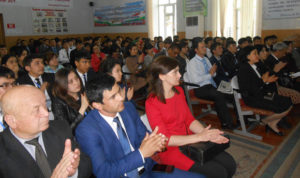